Angela departed for Cyprus at the weekend, on a short break to the lovely town of Paphos and the gorgeous Asimina Suites. Next week, we’ll update you on the hotel, and its sister properties – the Athena Beach and the Athena Royal Beach, but we thought it would be insightful first to show you the process of travelling through an airport at the moment, in our case Luton Airport, on a Saturday afternoon in October! 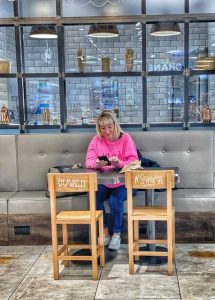 As you can see, there are very few queues, this is not the experience you are used to at an airport! Getting through security was an absolute breeze, as you can see there were no people around! In fact, there was hardly anyone in the terminal.

The flight to Cyprus was busier than most, nearly full – given this is a country you don’t have to quarantine on the return.

The usual precautions remain standard when travelling through both airports and when you get onboard. Everyone wears a mask, both indoors and onboard the airport (except when eating or having a drink), just the same as you would at a bar or restaurant here.