It was my first time in Madeira, the mountainous Portuguese island not far from the Canaries, and it really surprised me. Yes, I knew that it was going to be hilly, just as you find in Tenerife or Gran Canaria, possibly even more so, but struck by how civilised and sophisticated the island is. Since I have returned, I have been describing it as a cross between the Canary Islands and the South of France.

Our first stop was Reid’s Palace, one of the most iconic hotels in Madeira, if not in the whole of Portugal. As the first hotel, even before Madeira even know had an airport (more of that another time), it mixes modernity with touches from another era. Its famous guests include American presidents and Winston Churchill, who even has a suite named after him, the very one in which he stayed.

The original exterior of the Reids Palace Hotel 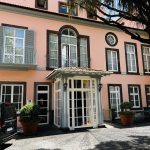 The original entrance to Reids Palace, which is now a lobby area, with the new entrance just around the corner. 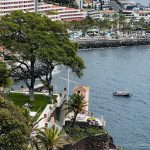 The hotel has some lovely views across the bay to the Port. 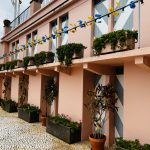 The theme of the light pink exterior runs through the entire hotel – both the new and old wings. 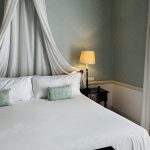 The Bedroom of the Churchill Suite, named after former Prime Minister Winston Churchill who used to stay at the hotel.

Another institution on the island is Blandy, the most famous Madeira wine producer, complete with its own cellar in the centre of Funchal. Madeira is a fortified wine, a little like Port (from the Porto region of Portugal in the north) or Sherry from the South West of Spain, and is most well known as being a dessert wine, but does actually come in a number of varieties. What sets it apart from Port, is it’s stored above ground in a warmer climate in what was an annex to a 17th-century Franciscan monastery.

Madeira wine differs from Port, native to Northern Portugal by being stored above ground at a higher temperature, giving a different flavour. 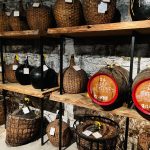 The lodge is home to hundreds of casks, dating back over a hundred years. 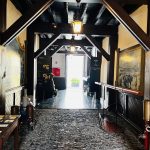 However, there is more to Madeira than just Funchal. We managed to get out into the countryside on a Jeep safari, heading up into the hills past the Banana plantations, vineyards and then Eucalyptus trees, which were imported from Australia. There are some really fantastic views on offer – the Nuns Valley which is totally enclosed. This isn’t one though for those who don’t like heights or large drops off the side of dirt tracks!

For those who want to be a little more active, it’s also great for walking. One of the best ways to appreciate the spectacular scenery is to take one of the island’s many Levada trails, following the irrigation channels which make up over 500 miles of paths. You can follow your own trail, or there are many guides that might make walking easier as part of a group. There are pickups from central Funchal, so you don’t even need a car! 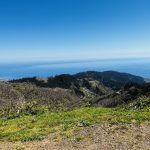 The scenery around Madeira is amazing. On the Jeep Safari we found out they grow bananas at lower levels, then grapes and eucalyptus is found on the top of the mountains. 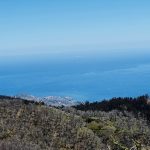 Our Jeep Safari took us to the Nuns Valley, were they put on a Mariachi band for us, before going off road to get some of the best views over the island.

The centre of Funchal is very compact and walkable. However, you shouldn’t underestimate the hills, as anywhere you walk is either uphill or downhill! With a large port right in the centre of town, Funchal is a great place to explore when arriving from a cruise, and every New Year many cruise ships can be found in the area to see their famous firework display. Madeira is also extremely well known for its flowers, of which there is a flower festival every year. It, therefore, shouldn’t surprise that it has many gardens and parks even within the city.

Madeira is a great destination all year round, with the average temperature rarely falling below 17C, but rarely rising above 24C. Fantastic if you like some warmth, but don’t like it too hot! If you’re looking to go walking, especially along the Levada trains, it’s probably best to avoid the colder winter months, where it can often be foggy. You might also want to stay during the flower festivals – either in May or September when the weather is usually very pleasant.

How To Get There

Madeira is just three and a bit hours from the UK (at least London), and there are a number of services that operate all year. These are all the flights which operate from the UK in 2022:

If you would like to visit Madeira, and follow in our footsteps at Reids Palace, Blandy’s or on a Jeep Safari, we would be more than happy to create your own personalised holiday to Madeira. You can visit the website at www.traveltimeworld.co.uk, email at yourdreamholiday@traveltimeworld.co.uk, or call us on 01442 879787